Digitalization from the point of view of an insurance company 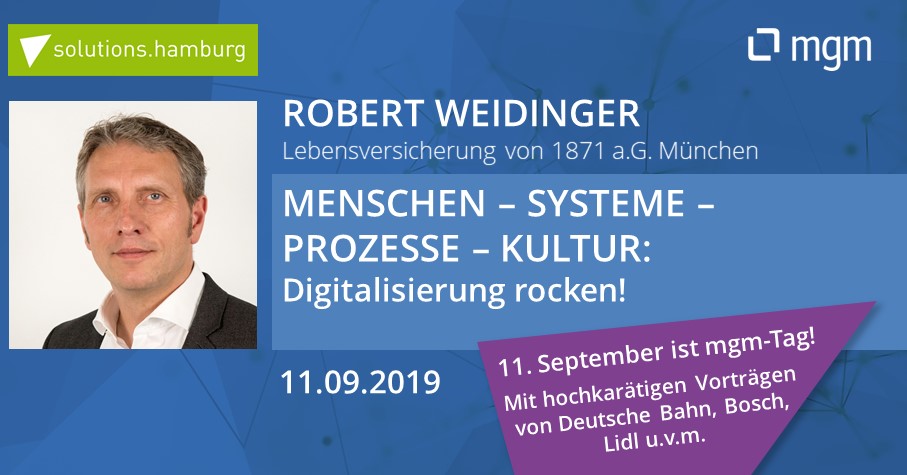 Robert Weidinger from Lebensversicherung von 1871 a. G. München is responsible for IT, digitization, organizational development, process and project management. For 15 years, he has played a key role in shaping the digital transformation of the company in leading positions. In an interview with mgm, Robert Weidinger explains the cornerstones he is relying on. mgm: Mr. Weidinger, in your opinion, what are the conditions for the successful digitization of a company?

Robert Weidinger: First of all, the basic prerequisite for a successful digital transformation lies in the capabilities of the IT landscape. We have the luck of early birth because we have been developing test-driven since 2002. An agile team with the best mindset won’t help me if you have to test the software manually for six weeks to see if it still works. With an IT landscape that can be expanded quickly and securely, we can create individual solutions for our independent brokers, for example. The second concerns the processes for developing the company further. We started 2002 with agile methods and in the meantime have given a lot of responsibility to our employees. For example, we always have a hundred employees planning the next four-month periods together in a big room planning. The third important point is the skills and know-how of our employees, who we consistently develop further together. Finally, the fourth cornerstone is culture, which consists of pride in one’s own abilities on the one hand and openness to external influences on the other, the willingness to learn to absorb external experience and bring it into the company.

mgm: Assigning responsibility to employees – but this also means that managers must be prepared to assign responsibility. Does that work well?

Robert Weidinger: Yes, it works. But it’s not like that’s a self-starter. The positive effect is that the manager is no longer a bottleneck. But you have to clearly define who is responsible for what, so that there is no diffusion of responsibility. And it is not so easy to clearly delineate the roles. Instead of an executive who takes care of everything, I now have a Scrum Master, a Product Owner, and maybe a Process Owner. That’s what it takes to become more powerful. But that doesn’t mean that this is a simple process and it doesn’t mean that nobody has ever thought about a certain topic. I hear so often that it’s a purely cultural issue. It’s not that, it’s that you have to make sure that it really works in the daily Doing.

mgm: Another question about cultural change: What would you say about how the error culture has changed?

Robert Weidinger: That, too, can only be answered in a differentiated way: as a financial service provider, there are simply places where you cannot afford to make mistakes. On the other hand, I see ourselves as allowing ourselves to try things in some areas, and if they don’t work well, we turn them in another direction. But this would be too dangerous in our core business, where our systems and processes simply need extremely high quality. Everything that has to do with money, data protection issues, IT security and a number of other issues … You can’t compromise on that.

mgm: Digital transformation permeates all areas of life. For companies this is relevant with regard to internal processes, but of course it also affects the customer side. To what extent have the expectations and behaviour of policyholders changed as a result of digitisation?

Robert Weidinger: Today one is simply influenced by other digital offers. Even if you don’t often need to see your life insurance contract or your occupational disability insurance online, it is a matter of course to get all the information about it mobile and at any place immediately. And that is simply a fundamental expectation of all customers. These are the self-evident things that you simply have to comply with. People today are also much better informed before making a decision.

mgm: How does this affect your external appearance?

Robert Weidinger: Even though we sell our products through independent brokers: We must also be visible to the customer. If the intermediary suggests to the client that he finish with LV 1871, his research must, of course, be carried out totally quickly and smoothly. This means that we must be present on all relevant channels.

mgm: … and also use the employees as brand ambassadors?

Robert Weidinger: Yes, exactly. We have an influencer program that includes training elements to communicate the openness of our brand and our company. Employees can post completely free of charge without having to coordinate it with the communications department beforehand.

mgm: What is still important in terms of employees when we think about digitization?

Robert Weidinger: We care a lot about people being able to grow in their craftmanship. Through the exchange with people from outside and many events in our company, we want to make it possible for our colleagues to broaden their horizons. And then the employees also think about developing new business models, about possibilities of digitization or how they can further their education within digitization. I think that is an important point: digitization not to think centrally. We try to bring a lot to the employee level and initiate thought processes there.

mgm: You have been in your company for over 15 years now and also in a position from which you have an overview and can observe a lot. How has the role of IT changed during this time?

Robert Weidinger: In the 1990s and even in the early 2000s, IT was primarily a cost factor – and that had an impact. They tried to get by with as few people as possible and therefore built systems that were as redundancy-free as possible. The result was complicated systems that only a few people understood. In the next phase, IT was seen as a service provider. The IT department often took over the structure of the departments in order to implement the topics of the departments in the best possible way. This led to, at least I experienced it, quite a high level of satisfaction with the internal IT. If you adopt the structure of the user departments, this is also reflected in the systems. The IT department was on a par with the specialist departments and really needed to understand what was happening there, both in insurance technology and in sales requirements. I think that this has allowed us to bring more products to market than if we had tried this in the old model. Now IT must be one of the drivers of digitization and also have an opinion on where a market will develop. And vice versa, the specialist departments must also think even more strongly in IT. From my point of view, the requirements have thus become even higher.